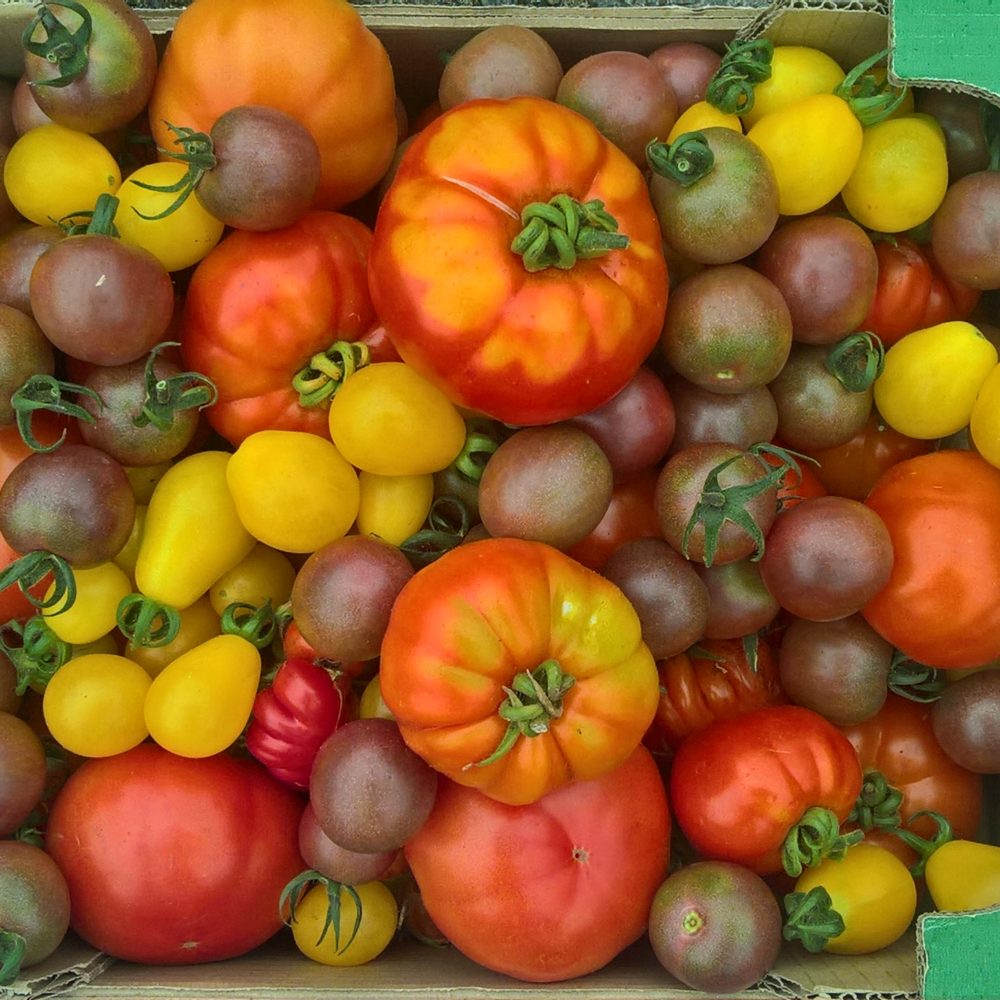 Mid-September. The garden is still awash with colour. Each week we say we will be slowing down, and yet another yield of vegetables appears. 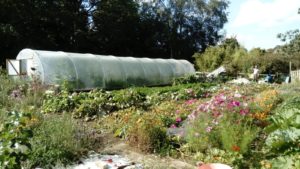 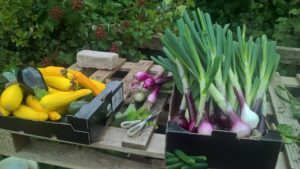 We start to hear stories of how our veg links with the lives of those who feast from Charis Garden. The boy who hates onions but eats the ones we grow. The woman who thought she didn’t like tomatoes until she tasted our varieties. The couple who tells us the veg box is the highlight of their week. The man who says he never thought kale could taste so good. We also share in the joy of feasting from the garden, skipping the vegetable aisle in the supermarket completely. The garden provides. 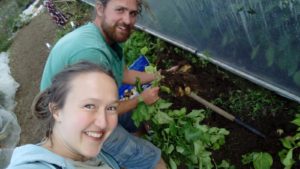 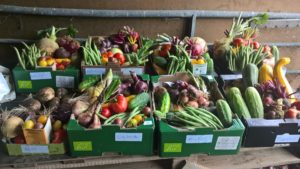 The daily work with soil, plants, rain, sun, slugs and caterpillars is what makes it all possible. By now, the lines on Jeremy’s hands are engraved with clay. Our three year old learns how to lift spuds and pick beans, without pulling down the whole plant. Claire realises she can pick and pack salad leaves with a baby on her back.

In the meantime, word of mouth continues to connect new people to the garden. The local Church of Ireland minister pays a visit, and mid-garden tour, invites Jeremy to speak at the annual Harvest Service. The thirteen year old niece of a friend, whose name is also Charis, comes to visit her garden namesake. Jeremy’s cousin Maebh travels from Sweden to lend a hand for a few days. 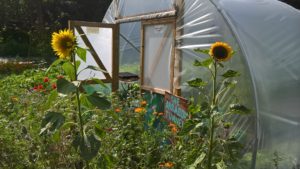 We are struck by the overwhelming weight of the garden, the way it gravitates us into rhythms of hard and constant labour. We are also struck by the hunger of our local community for good food, grown well. There is no shortage of people who want to eat what we grow. We feel the push to grow more, supply more, get bigger, better and busier. We discuss packing sheds and cold storage solutions as the Summer heat intensifies. Jeremy enrolls in a business course one day a week. We negotiate the rollercoaster of uncertainty involved in growing seasonal produce for a local community. Do we create a pick up point? Do we deliver? Do we have a fixed cost? Do we offer choice in weekly boxes? What happens if everyone goes on holidays all at once? Why are we growing all this stuff anyway? Should we put that first beautiful head of broccoli in a veg box for sale, or keep it for ourselves?

We come back to the garden. The bees hum their way through the Phycelia and Clover. Sunflowers stretch and open. We observe how everyone who enters Charis Garden is touched by how beautiful, how alive it is with the fruits of flowers and food. 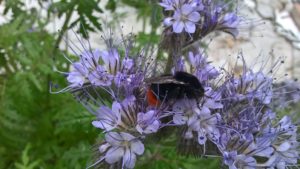 Charis is a Greek word meaning grace: God’s way of loving the earth and all people. At times, in the stretch of the busy summer, it is easy to forget that we labour here in the midst of grace – God’s love, joy and beauty – and not primarily under the hard and unforgiving laws of market production. Our first priority is to nurture the garden so that it, in turn, can bring blessing to the lives of the people around us. If we can’t be kind to ourselves, we can’t extend this charis to others. 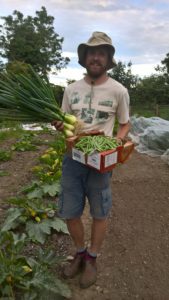 Three words define what Charis Garden is all about: Soil, Soul and Solace. For months now, we had poured our efforts into the soil, and the fruits of the soil’s harvest are richly evident. We are now beginning to explore the garden’s purpose as a place of soul-food and solace for people too. 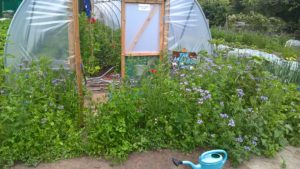 As Autumn approaches and the garden begins to slow down, we sink deeper into the furrows of our path here, slowing down to reflect on how these aspects of the garden might develop. We plan our sowing schedule and think ahead through winter into spring again.

We also sow into Soul and Solace by beginning an intentional rhythm of prayer to keep our hearts centred in the presence of the God of grace. We sit with the uncertainty as seeds pressed into soil trust that darkness will not hinder their growth into light. 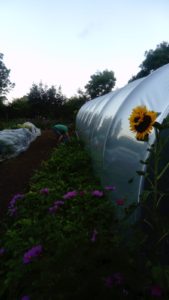 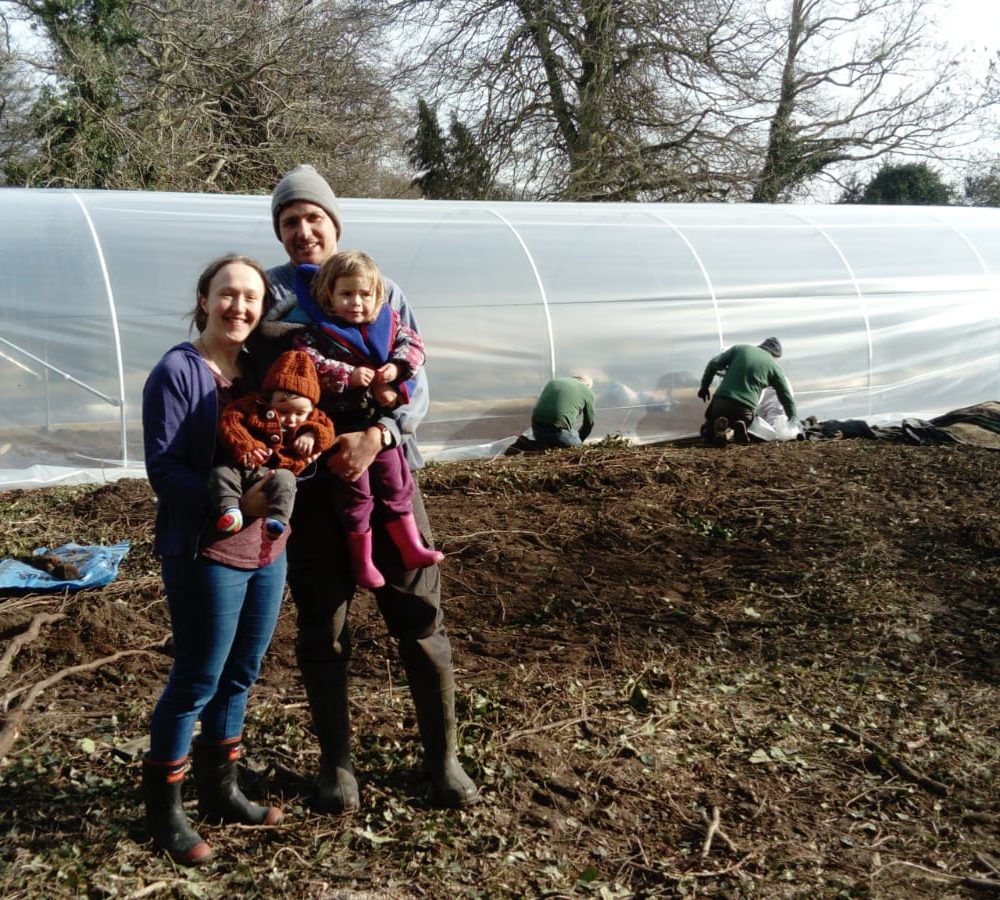 From the start, Charis Garden has been a community act: many different people are already part of the story, having given vital hands-on assistance, counsel or encouragement – not to mention the teeming crowds of creatures, above and beneath the soil, who make all the growing happen.

Genesis. In the beginning there was jungle: a half-dead orchard, carpets of ivy, a forest of invasive bamboo with canes fifteen feet tall, clusters of nettle, dock and thistle. We begin with a spread of black silage tarp, enough to keep the soil warm through winter and block the rush of summer weeds. 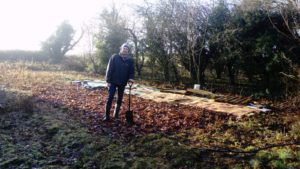 To learn the basics of organic growing, Jeremy embarks on an apprenticeship at Moyleabbey Farm in nearby Ballitore. You can read about some of his experiences here: https://foodture.ie/2018/10/02/a-growers-diary/.

Jeremy finds an old bee hive. Clueless, he decides to have a go at setting a bait hive to catch a swarm of bees. He adds a roof to the hive (a discarded fertiliser sack), a base (a section of old plywood) and sets it on a barrel in the shade of a horse chestnut tree, right in the middle of the teeming garden wilderness. Days later, he pays the hive a visit and, to his intense surprise and delight, discovers a bee colony has moved in.

A week later, David (Claire’s father) lifts another swarm out of a tree and places it in a second hive. Our beekeeping journey begins. 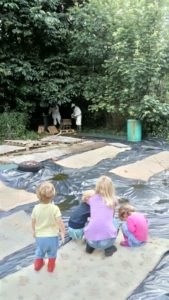 We tackle the mighty tangle of bamboo. Canes are cut at the base with a heavy-duty strimmer or chainsaw and carried out of the garden by hand. The roots are forked up in the jaws of a silage grab and heaped in a corner of the garden. 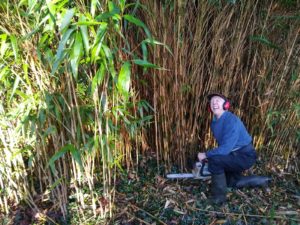 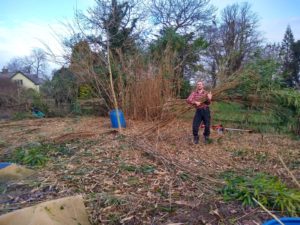 The tractor rips up the gnarled trunks of apple trees. We are careful to keep one tree intact: a reminder of the orchard that graced the garden in a former time.

The clearance work continues. The jungle slowly devolves into a blank, muddy canvas.

As his namesake suggests, David is a feller of giants. He guns his chainsaw and gets to work on a variety of towering sycamore and ash. One by one they fall. The vast trunks are then slowly sectioned up for firewood. 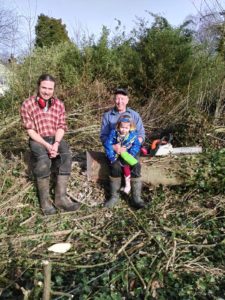 Trees can fall in unpredictable ways. One vast sycamore trunk landed a mere inch from the beehives situated near its base. 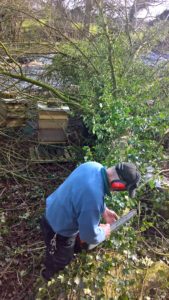 Vast tree stumps dot the bare soil. Raymond, a neighbouring farmer, shows up first with an antique digger and later, a giant JCB, to pull them up.

A brand new polytunnel is installed. Jeremy gets busy digging the beds inside, adding buckets of farmyard manure (supplied by  neighbouring farmer) and coffee grounds (supplied by a busy local café) to bulk up fertility. 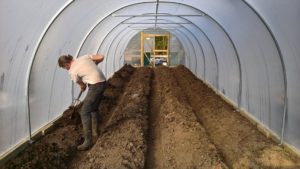 In the aftermath of tractor traffic and tree removal, soil is uneven and damaged in places. Work is slow. Beds are gradually formed with fork, shovel, rake and hands. 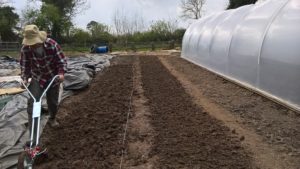 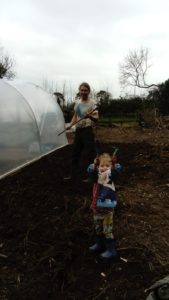 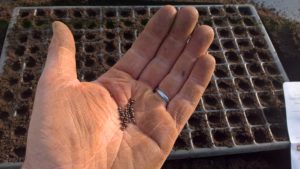 He clears the hedging that hugs the borders of the garden and replaces tumble-down fencing. Chicken wire is installed to deter rabbit entry.

From a stash of old windows, the Hot Box is built: our very own custom-made plant propagator. A heat blanket is added to provide the crucial warmth needed to spark the seeds. Over the coming months, the Hot Box provides the vital start for a whole host of heat-loving crops: tomatoes, aubergine, cucumber, bell peppers, courgettes, squash and pumpkin all begin life here. 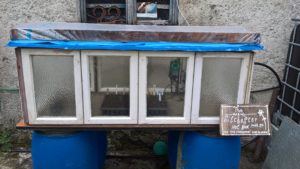 Sowing continues throughout the month. Most seeds begin life in a seed tray. Once sapling-sized, they are ready to be transplanted into a bed. Potatoes are the first crop to be sown directly into open soil and fed with a generous dump of horse manure (provided by another neighbour.)

Work continues apace as the outdoor beds become more defined. The first salad crops are planted in the polytunnel. 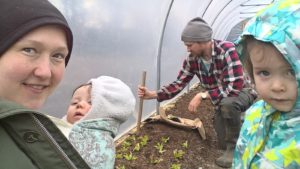 The bee hives have sat in the same place since the day the bees first arrived, now almost a year ago. The work of garden transformation has hummed around them. Now Jeremy and David begin the task of moving them to the apiary area (recently an almost impenetrable heap of dead wood and ivy.) They decide the best option is to shift the hives, three feet a day, along a set of ladders. 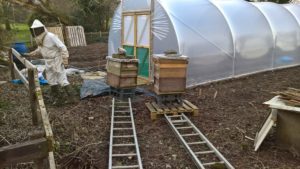 Onions, Fench beans, salads, kale, tomatoes: all these and more are beginning to green the bare soil of the garden. Jeremy constructs a French bean trellis out of the bamboo canes removed from the garden in January. 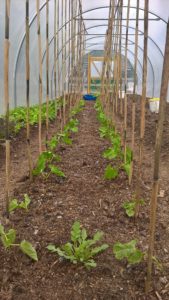 Both bee hives swarm repeatedly over a four week period. We go from two hives to six. 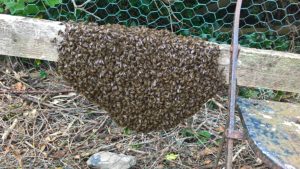 Meanwhile, the salad bed blooms. The first leaves are cut and savoured. Kale, purple top turnip, spinach, succulent head lettuce and coriander are harvested. We begin to share the wealth with neighbours and friends. 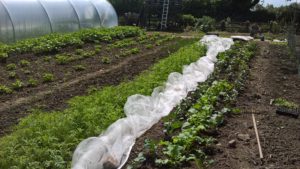 The garden is a riot of life. Beds of green manure burst with colour – clovers, Phacelia, sunflowers, marigolds – humming with bumble bees and hoverflies. The green canopies of the potato drills are thickening; the first Earlies will be harvested in the next fortnight.

Courgettes are beginning to bulge; tomatoes are forming in the tunnel beside the burgeoning cucumbers, scallions and beans. Bell pepper and aubergine plants are flowering. Hopefully, by summer’s end, we’ll be harvesting their succulent fruits. 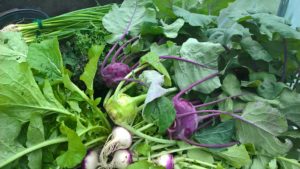 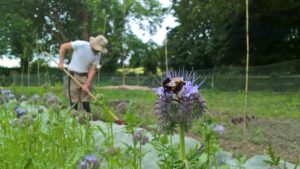